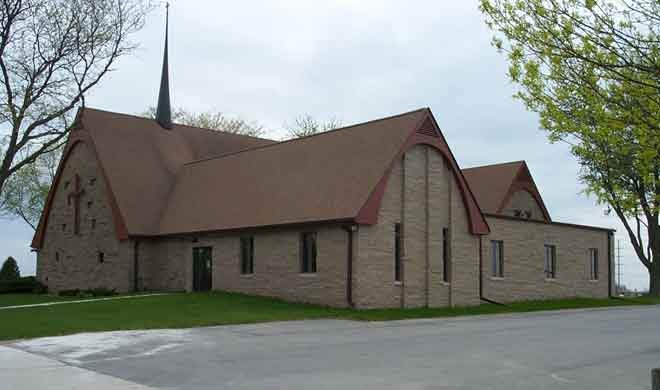 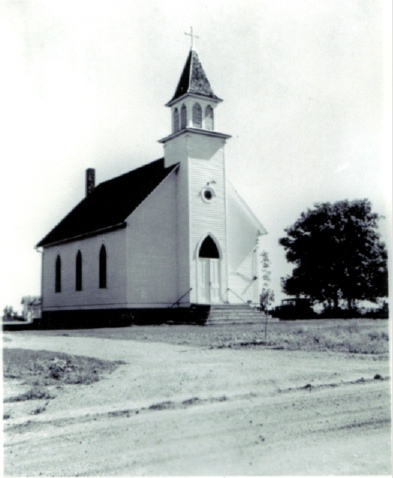 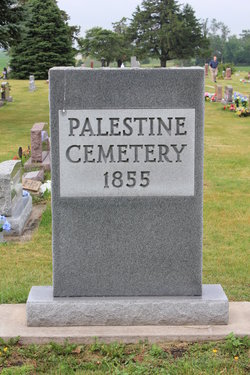 Palestine - The Land of Milk and Honey

"We have fulfilled our mission and found a land that far exceeded our fondest expectations in beauty and fruitfulness...it is the land that the Lord has prepared for us."

A group of Norwegian immigrants, temporarily located near Lisbon, Illinois, in 1854 had sent out four of their number to investigate reports of good land in Iowa.  This report they brought back.  Thus is followed, in the spring of 1855, one-hundred and six persons organized into a Lutheran congregation that they might better serve their Lord, that He might be their guide and protector while traveling through a strange, unknown country.  They named the congregation "Palestine" in keeping with the description of the land they were first to possess on coming to Iowa; and named Ole Anfinson to be their first pastor.  By covered wagon, they moved from Illinios to a destination in Story County, Iowa, near the present day location of Palestine Lutheran Church.

They reached their destination on June 7th.  The following Sunday, they gathered and gave thanks to Almighty God for his guidance and protection as they made their journey.  The first building in the new settlement was a simple shelter with a roof of prairie grass.  This served in summer as the first house of worship for the Palestine congregation.  In 1860-61, work began on a permanent church building, but because of the Civil War, this was not completed until August of 1866.  Rebuilt, remodeled and enlarged on several occasions, this building served well until destroyed by fire, April, 1957.  Work began the following spring on a new building.  The Opening Service of Entry was held for the present building in September of 1959.  An addition to this building was dedicated in January 2005, as we began the celebration of our 150th year.  Today people from Ames to Des Moines call Palestine home.  We welcome all people of all ages as servants of God's rich grace!

This church is now located in the town of Huxley.  Fjeldberg Lutheran Church pictured here 1915 located on North 2nd after being rolled in on logs from South of Huxley.

The first meeting of what was to be the Fjeldberg Lutheran Church was held at a farm house one-half mile south of Huxley in June of 1865. Six Norwegian pioneer families were charter members. The name “Fjeldberg” was chosen because most of the members came from that district in Norway. The first church building was completed in 1867 and was dedicated on November 10, 1867. It was built a mile south of Huxley, where the cemetery is located today. The first pastor was Rev. N.G. Amlund, who served Fjeldberg and St. Petri Lutheran Church in Story City, Iowa. The first resident pastor was Rev. O.A. Sauer, who was installed in October 1869.

In 1906, the decision was made to move the church into the town of Huxley and this was accomplished by crossing fields and planking all the way. It was not until four years later, in 1910, that the parsonage was completed in town northeast of the church.

n 1913, the church was remodeled and enlarged, making a sloping floor so that nowhere in the church was the altar obstructed from view. The windows were large, made of beautiful stained glass. The cost of the project was $13,000.

The Norwegian language was used exclusively until nearly 1920. At the annual meeting on January 9, 1935, it was decided that all services be conducted in the English language.

There have been three ordinations in the Fjeldberg Church: Rev. Louritz Guttebo, ordained in 1904; Rev. Herman Lunde in 1922; and Rev. Jim Hill in 1978. Miss Belle Richardson was commissioned as a missionary and served on the mission field in China beginning in 1927.

On February 22, 1945, a great calamity struck the congregation when the church building and all of its contents were destroyed by fire. However, two weeks later at a special meeting of the congregation in the auditorium of the Huxley High School, it was decided to build a new church. Work was soon begun, and the cornerstone was laid on October 28, 1945. In June of 1946, the basement was ready for use. Because of wartime shortages, the church was not completed and dedicated until February 22, 1948, exactly three years after the fire. The cost of the new church and equipment was $64,251.52. This entire total was raised by December of 1948.

On January 23, 1957, the congregation voted to build a new parish addition. This new unit was dedicated on May 24, 1959 by Rev. Olaf Holan. The dedication also included an afternoon children service. A total of $81,507.40 was spent on this new building, which also included some remodeling of the main building, new hot water heating equipment and all furnishings. The remaining debt resulting from building the parish addition was paid in full during 1968.

At the 1973 annual meeting the Fjeldberg congregation voted to buy a new Reuter pipe organ at a cost of $18,000. The parsonage was remodeled in early 1976.

During October 1977 the congregation decided to buy the Wisecup house southwest of the church at a cost of $35,000 and the Kampley house west of the church at a cost of $28,500 for a total of $63,500. The houses were used for Sunday School classes. The Wisecup house was sold, and in July of 1982 the John F. Kalsem home south of the church was purchased and is presently used for Sunday School rooms and is called the Ark. The Huxley Food Pantry is also located in the Ark. The Kampley house was demolished and the lot is used for a parking lot.

At the January 1987 annual meeting the congregation voted to merge into the ELCA. The sanctuary was refurbished in 1990.

Tim and Paula Tjernagel were commissioned as missionaries in 1997 and are serving the Lord in Spain.

A new handicap access addition, which included a 4-stop elevator, was built onto the southeast corner of the church in 2000, and dedicated in February 2001.

The following pastors and youth directors have served the Fjeldberg Lutheran Church:

The cemetery is located at the corner of hwy 69 and hwy 210 - Fjeldberg Cemetery, Section 25, Active 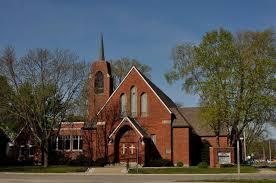 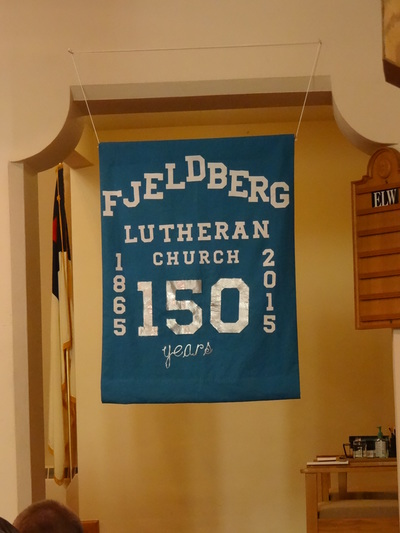 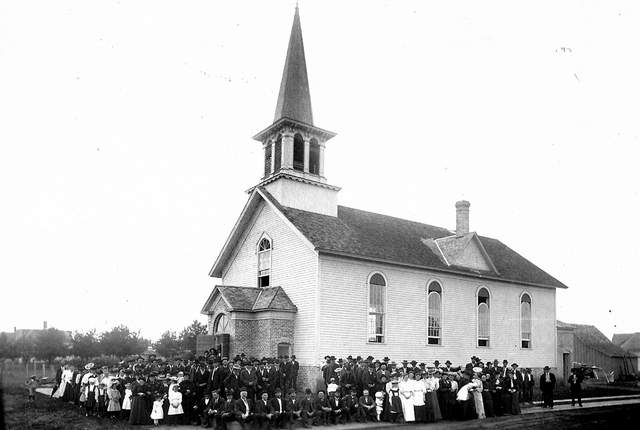 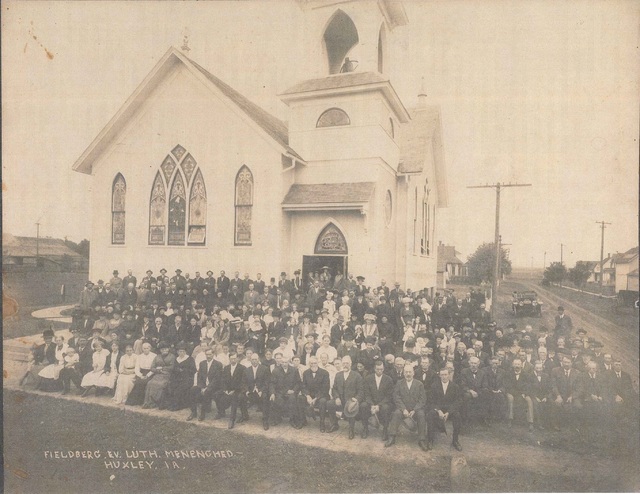 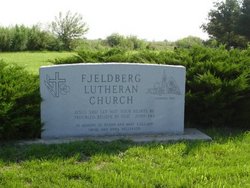 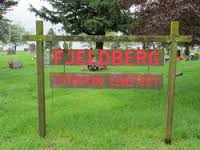 Before and After photos show the work! 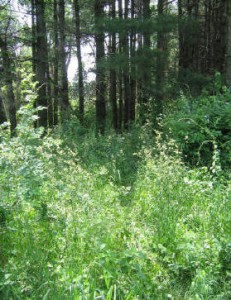 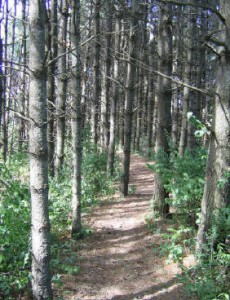 The Huxley Historical Society (HHS) recently assumed the project of cleaning up and helping preserve the Ballard Grove Cemetery. The cemetery is located 0.7 miles east of the Huxley City Maintenance Building on Oak Boulevard and is the burial site of the first two European-American settlers in Story County. Simon Ballard who died around 1850 and Adam Ballard who died June 25,1860. The Ballard Grove Cemetery had fallen into a state of disrepair with overgrowth and trees since the Ballard descendents had erected a memorial headstone at the site in 2003. 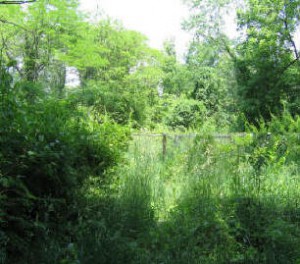 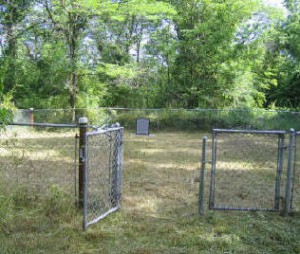 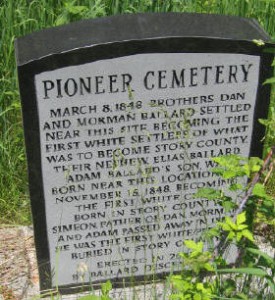 Erected in 2003 by Ballard Descendants.

The other side of the stone reads; 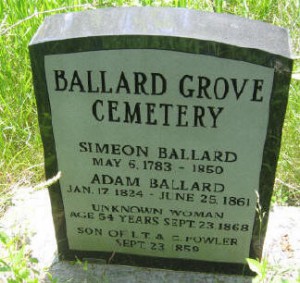 The projects brainchild and Vice President of HHS, Don Duncan with the help of Ron Krull, Mike Orgler and Craig Henry mowed, cleared downed limbs and brush, both in the cemeteries enclosure and the pathway to it. Loren Larson of Ames and a descendant of the Ballard’s said about the project, "For the family, I want to thank all of you for the work already done."

Other information that the Historical Society has, states in 1992 two pieces of grave markers were found by probing the area, neither had names but both had poetry, one said "a friend ever kind & true he exhibited all of the ----. In death his redeemed spirit returned to God who----."   It is surmised that this poetry was from the marker of Adam Ballard and that the following was from the marker of his wife,  "As a wife devoted, as a mother affectionate, as a friend ever kind & true."

UPDATE 8-11-06: It is documented that Catherine ADAM BALLARD'S wife married Moses Crowser on July 8, 1869 and changed her name to Crowser.  Her minor children, however, were not adopted by Mr. Crowser and their surname remained Ballard (which may have led some to believe that Catherine died a Ballard). The court documents state that a guardian and trustee was appointed for the minors: Caroline, Mary, John and Adam Jr.. Catherine then gave up her dower rights, Adam's land was sold and the money put into trust until each of the children were of age, at which point they withdrew their share.

Catherine (Ruby Ballard) Crowser is buried in Cambridge Cemetery (NOT Ballard's Grove) with her second husband Moses and her son "Addie" (Adam Jr.).

There is also a very old marker nearby that reads only: A.C.B. I have a feeling that this is the grave of Adam Jr. Ballard. Given the plat map information of the time and the deed on file, but it would make more sense for him to be buried in Cambridge. Information added 8-11-06-courtesy of Melissa Jacobs

Its generally believed that there were originally 5 persons buried at Ballard cemetery.  Although the 5th person has not been identified by us. 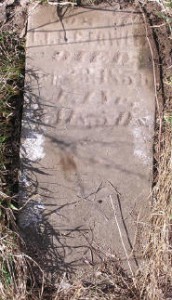 This stone has been recovered and it’s believed to read son of L.T. & C Fowler OR L.L. & C Fowler Died Sept 23, 1850 OR 1853.  Simeon did have a daughter, Catherine but the only recorded marriage information we have for her currently is she married Isaac Thompson in Ill.